On this next trip journal, it was a trip done pre-Covid that was kind of last minute. It was during the long holidays in Indonesia and there was the chance to burn some Alaska Airlines miles for a redemption flight on Japan Airlines. The flight would be on Japan Airlines Business class flying out of Singapore to Tokyo Haneda and returning from Nagoya to Bangkok Suvarnabhumi. This journal would be short and mainly cover the flights and new hotels I stayed at in Japan and Bangkok.

Started off this journey on a slightly sour note as the check in at Changi airport Terminal 1 for the JAL flight was terrible with an incompetent agent. A bit of a backstory here is that my flight was to Tokyo Haneda with a return flight from Nagoya to Bangkok. From Bangkok, I had a separate itinerary returning to Singapore. At this point, the agent asked for my return ticket to Jakarta but I was returning to Singapore. Not only did she process it slowly but she had to ask a supervisor with regards to the lack of a continuing segment to Jakarta as I had not ascertained the dates of my travel back to my home country. As an Indonesian passport holder, I have visa-free access in both Thailand and Singapore, so asking me to prove my return ticket is baseless especially since my return is yet to be finalized. For frequent travellers that fly on sometimes out-of-the-ordinary itineraries, it is irritating when I encounter check-in agents who is not only clueless, but insists that he/she is right, when the facts are otherwise.

There was another issues as well since it was a night departing flight and I was in a hurry to pick up my Japan SIM card that I had pre-purchased at the airport before the closing of the booth. Thus it was a major inconvenience for me and I was frankly getting irritated by the slow handling of the check-in process on what should have been a quick one.

Fortunately after the bad start there was no queues at the immigration late at night and I was quickly through to the lounge. Only the Dnata lounge was open since the Qantas lounge was already closed at this hour and having previously reviewed the lounge, I would only add some photos of the food served on the buffet at night. The dinner served in the lounge was not too bad and there was a good selections of Japanese cuisine from Udon noodles, to Japanese curry.

There was also beef stew, pasta, chilli con carne and a Singapore favourite of satay. Travellers can certainly have a filling dinner in this lounge though the food did not look particularly appetizing to me since I already had dinner and was not keen on another meal this late at night.

From the lounge it was a leisurely trek to the departing gate which was just beside the ‘C’ gates transit counters. The terminal did not have too much passengers during the festive season

Japan Airlines have up to 4 types of Business class configurations on their regional and long-haul Business class cabins, with 3 of them full lie-flat seats and one of them an angled flat seat. On the 777-200 serving the red-eye flights between Singapore and Tokyo, the seats are similar to Cathay Pacific long haul business class and is referred to as the Sky Suite III. There was a total of 11 rows of Business class in this configuration and the cabin was split into the larger front section between the first and second door and a smaller cabin consisting of 4 rows in the smaller section where we were seated. I noticed immediately that the cabin was a bit dark on boarding and somehow felt a bit more cramped. Perhaps it was the more intimate smaller section or perhaps it was just the furnishings and the colours of the cabin was not that inviting. Or perhaps it was just the lack of daylight into the cabin, but my first impression was not the best.

On the seat itself, there was a small amenity kit, pillow, blanket, a pair of slippers, a pair of headphones in the red plastic bag and the inflight menu.

By the armrest there was a note for passengers to fill in to indicate if they would like to be awoken for breakfast. There was a bottle of Evian mineral water provided too. As I got settled on the seat, the stewardess on this flight came online to announce a flight time of 6 hours and 25 minutes. This was after the Japanese announcement was made.

The menu for this flight is as follow, there was also a Japanese language page which I left out in this report. It is considerate for Japan Airlines to describe the items in the Japanese bento set correspondingly. 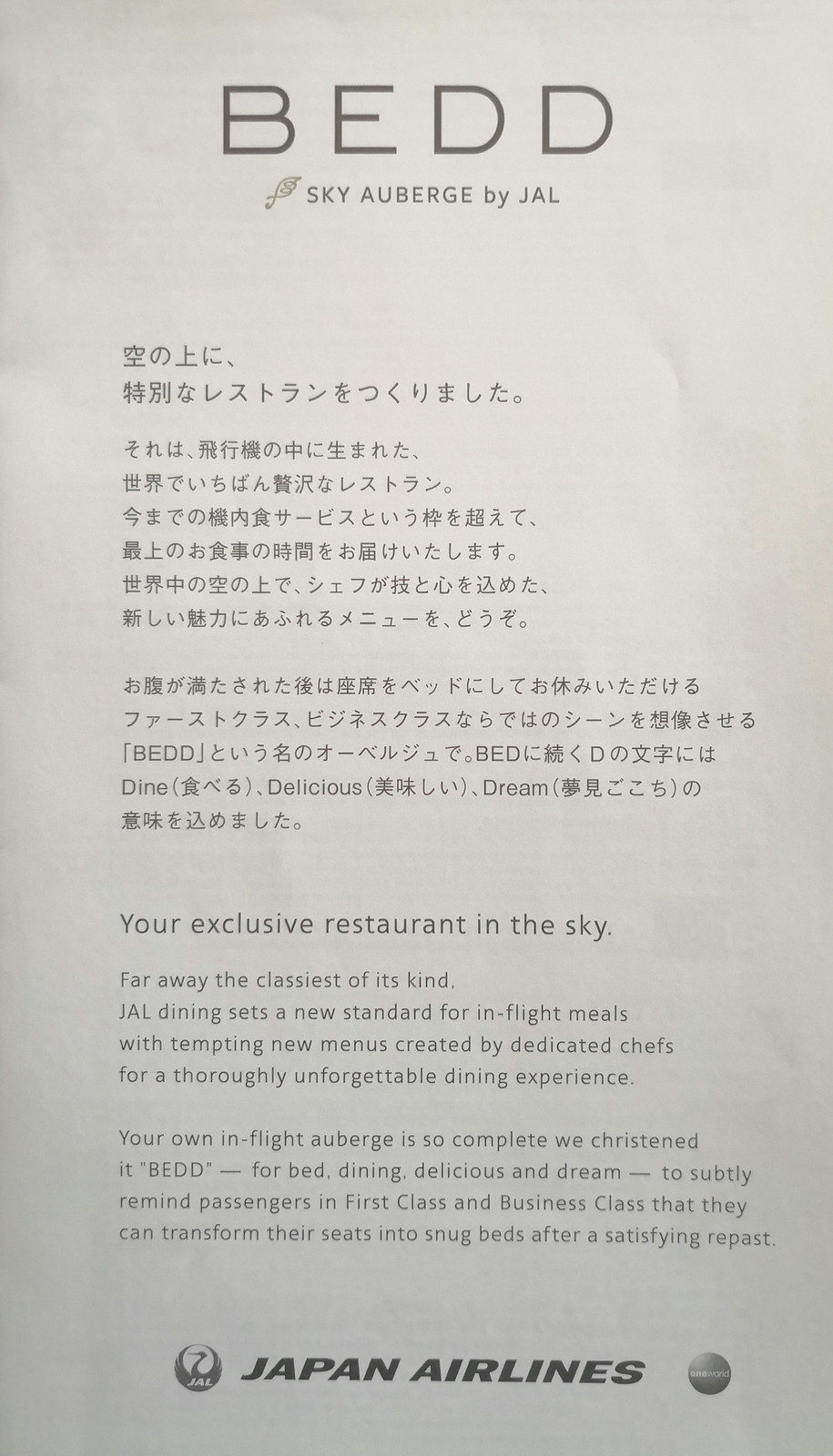 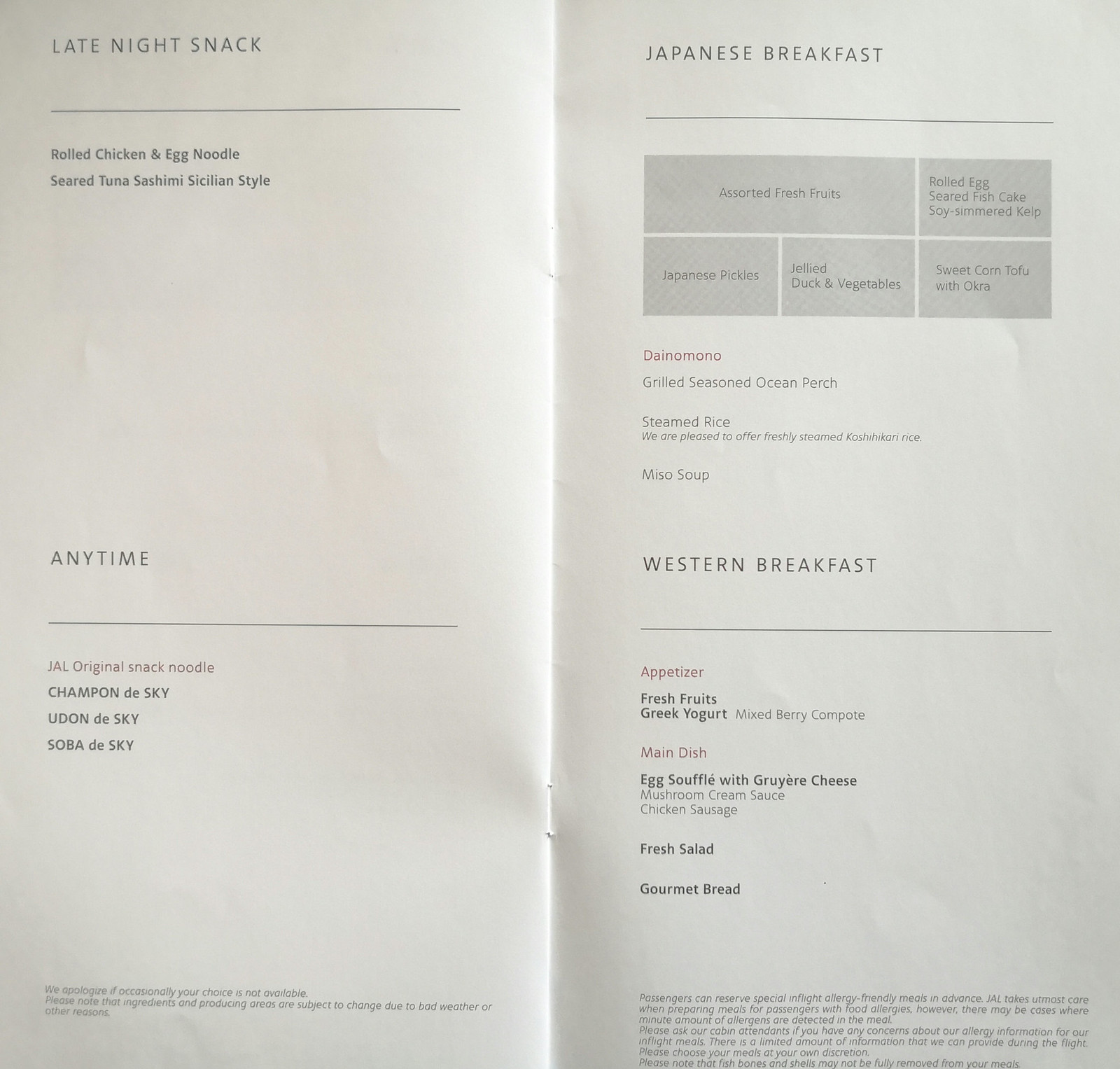 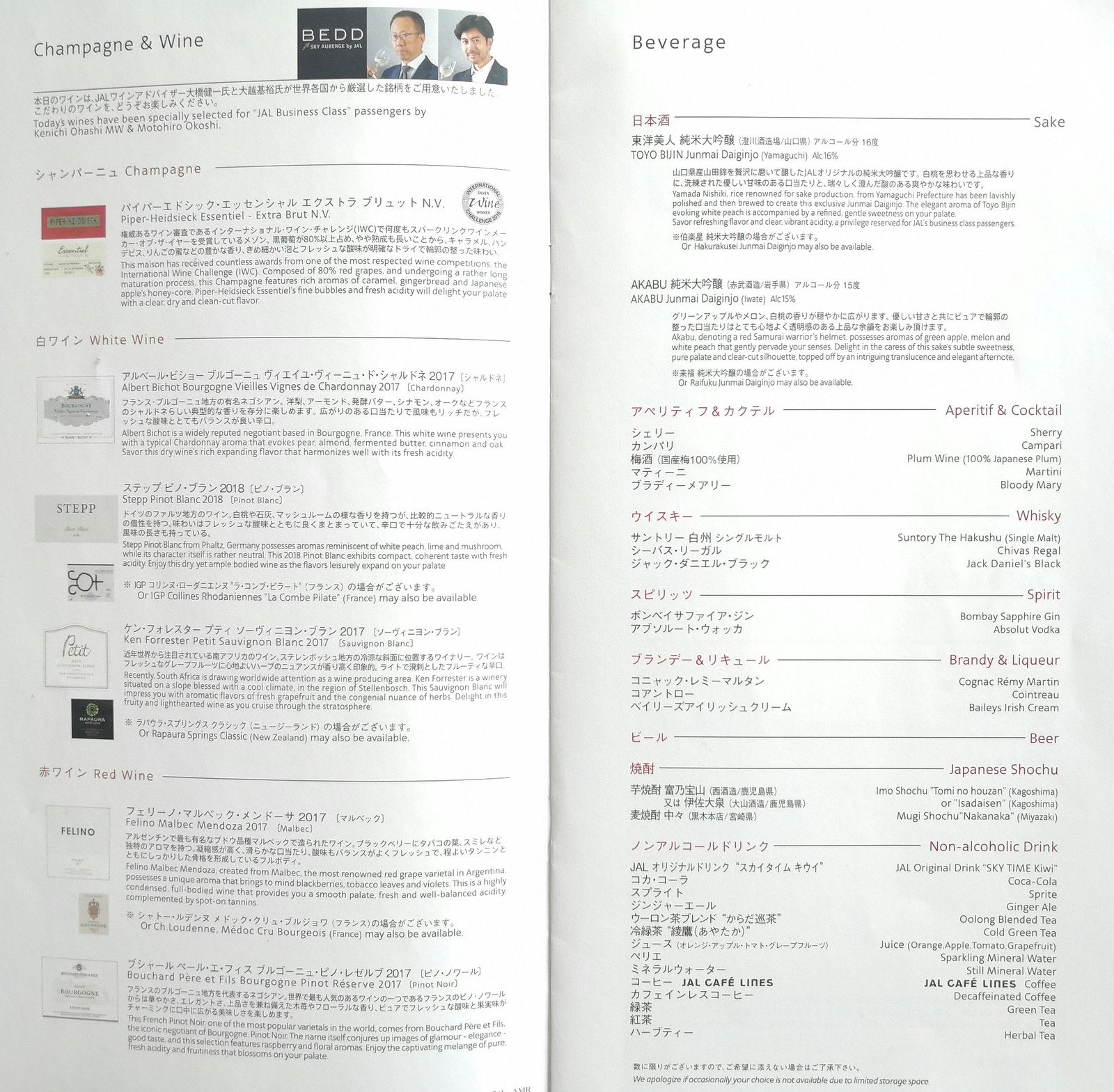 Next to the armrest space, there was a divider for added privacy for passengers seated in the middle column, and there was easily accessible power outlets, USB charging ports and headphone outlets. Above the outlets, there was a storage space with a door that features a mirror so passengers can refresh before arrival. This is useful for business travellers on a red-eye flight if they have a meeting to attend upon landing.

On the underside of the armrest was the safety manual, inflight shopping catalog, entertainment schedule and onboard magazine. There was a quick access seat adjustment buttons as well and an inflight entertainment remote that I rarely see on other airlines.

For this relatively full flight, Japan Airlines still managed to conduct a quick boarding process though I note that there was no pre departure drink for Business class passengers. No socks was also included with the amenity kit so I enquired about them from the attendant. Unfortunately Japan Airlines does not supply socks onboard but they were able to loan a pair of cardigan. Fragrant hot towels were distributed onboard to Business class passengers and by 1:55am Singapore time, we were on pullback and the safety video was shown.

After a smooth take off the cabin lighting remained in dim mode to allow passengers to sleep, since the meal service for this flight was meant to be a breakfast served prior to landing. The seat belt sign was switched off quickly as well so that was a benefit for passengers needing to use the lavatory before sleeping.

While the cabin was dark, I checked out the entertainment system since I was not that sleepy yet and there was a late night snack service that I would have missed out on had I went to sleep immediately. Japan Airlines calls their entertainment system the Magic VI, though there is not much magic there as the user interface is not as good, nor was the selection as varied.

A snack was served after take off consisting of noodles with soy sauce chicken and a tuna with salsa and edamame. The portion is a bit small even for supper though both tasted delicious and was enjoyable to have on a flight.

There was rice crackers as well that I asked for since I was a bit hungry. Rice crackers onboard with the JAL Sky Time drink are always a hallmark of Japan Airlines service. The Sky Time drink was the kiwi flavour for this flight, and I actually preferred their old Yuzu flavoured one.

After the short snack service and without any much entertainment selections, I head to the lavatory to brush my teeth and prepare for bedtime. The lavatory was basic but clean and is the standard size for a 787 (which means small). There was some Shiseido branded lotions supplied inside the lavatory, along with toothbrushes and individual sachets of mouthwash. Though the toothbrush can also be found in the amenity kits provided for this flight.

Back at my seat, I reclined the seat to full flat for the night. Surprisingly, the cabin was conducive enough for a good sleep as the temperature was set agreeably. On most Japanese airlines, the cabin temperature is usually set too warm for my liking. It was not too warm nor too cold for this particular flight so I didn’t use the blanket; instead I used it to pad the seat. Japan Airlines supplied an ‘airweave’ pillow that had a memory foam filling and it was nice to use, as it offered much better support compared to the flimsy pillows supplied on other airlines.

It was a short sleep but I did have a good rest for the night and once passengers woke up, they were presented with hot towels. The cabin has a nice mood lighting for the pre-arrival meal service for which I had ordered the Japanese meal with the green tea. On the bento, I enjoyed the egg, fish cake and kelp on the upper right section, along with the corn tofu with okra on the bottom right. The steamed rice with the perch also made for a nice change for breakfast from the usual omelette, and dare I say, even better!

After the meal there was still some time left for me to check out the main Business class cabin with the lights fully switched on now. There was also time for passengers to refresh in the lavatories before landing as the cabin was not packed. For the remainder of the flight, it was uneventful as the flight attendant went about their duties and it was a smooth landing into Tokyo Haneda airport which is the closer airport to get to town.

Service onboard this flight was standard for airlines but the crew seems busy and not attentive to needs of passengers. There was little interaction with them as well due to the short red eye nature of this flight, so I would not rate this flight highly since I used to be a frequent flyer with Japan Airlines when they were flying Jumbo Jets between Singapore, Narita and Vancouver. Even then, the flight was wonderful as there was a good range of amenities from the Sony noise-cancelling headphones to the fantastic meal served on this flight if one likes Japanese cuisine.

As for the seats, these are obviously not Japan Airlines’ best Business class seats, but they were not the worst either. On this short red-eye flight which probably sees plenty of business travellers, they did the job in providing privacy and a nice bed for the night, making this a practical choice rather than a luxurious one.